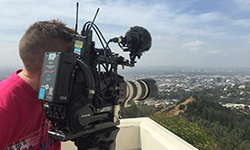 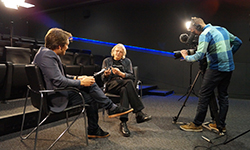 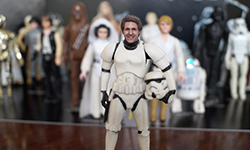 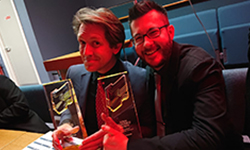 Both have been screened multiple times on BBC World and BBC FOUR.

David celebrate the unsung British heroes behind the original 1970s Star Wars film. The documentary features a wealth of stories, experiences, anecdotes and archive footage from the British talent who brought the galaxy to life.

His mission takes him all over the UK, to the States and the Caribbean. His warm interviewing style draws out the surprising tales and jaw dropping moments on set from the often modest and understated British men and women who made the film happen.

The film is 90 minutes long – a must for Star Wars fans and is in memory of Star Wars Producer, Gary Kurtz and Costume Designer, John Mollo, who passed away shortly after the production ended.

Full details on the documentary can be found at:

David celebrates how a tiny town in the Midlands became the very centre of the Star Wars galaxy in Britain for the toys.

Coalville in Leicestershire was the home of toymakers, Palitoy. Already successful with ranges such as Action Man and Tiny Tears, the next brand would propel them into hyperspace!

This is the story of the toy designers and factory workers, tasked with filling the toyshop shelves of the UK.

Palitoy's sister company in the U.S. – Kenner had landed the licence from LucasFilm. Palitoy would make, assemble and, thanks to their ingenuity, even redesign some of the toys. But most toys connected with movies did not traditionally do very well and if a film flopped, retailers and manufacturers were left with a load of stock they could not shift. The marketing team at Palitoy had quite a task convincing the trade to take it. But obviously Star Wars bucked that trend and then some!

'Toy Empire: The British Force Behind Star Wars Toys' tells the story of the rise and fall of Palitoy; and how its legacy lives on with collectors, who look back with nostalgia at the toy product that would define a generation.

FOR THE LATEST NEWS & UPDATES

GET IN TOUCH
©2020- GALAXY PRODUCTIONS